Warning: "continue" targeting switch is equivalent to "break". Did you mean to use "continue 2"? in /homepages/24/d538781798/htdocs/clickandbuilds/ComeniusProjekte/wp-includes/pomo/plural-forms.php on line 210
 Comenius 3 | COMENIUS-Projekte 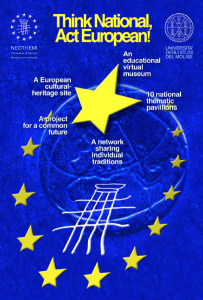 NEOTHEMI (The new Network Of Thematic Museums and Institutes) is a Comenius 3 supported European collaborative project aiming at the creation of a strong network for cultural heritage developed in the framework of a virtual educational museum. Traditionally, museums would only display the cultural heritage of one or more countries thus illustrating some nationally relevant ‚realities‘. A reframed concept would instead see the museum as both a physically flexible place and a virtual space where visitors could find, close to each other, and compared, physically-distant objects, texts and artefacts from different countries but belonging to comparable cultural horizons (history, style, society). The contributions of the countries involved are grouped in broad areas, called thematic ‚pavilions‘, which are designed around themes of varied types but all related to cultural heritage. National differences are respected, together with the promotion of a larger European perspective to overcome any cultural divide. Each of the partners from 10 different countries and institutions is organising one theme autonomously, but only after negotiation with the other partners to ensure compatibility.

Our Logo
Neothemi is a manifold project and its logo should reflect its educational aims, its intercultural attitudes, its ability to link different cultural heritages within a network and most of all its use of the new technologies as formative active elements.

The first idea was to put culture as the focus of attention: an ancient column, which does not refer to any specific culture, but rather to a wide spreading cultural style such as Classicism. Furthermore, Ionian columns have few or no decorative elements and this makes for an easier stylization. In fact the vertical lines of the column have been used as bi-dimensional graphic elements and criss-crossed by similar transversal lines.

The graphic net pattern shifts perceptions into notions and the icon of the column into the idea of network. Together with this notion automatically comes the idea of new technologies, hinted at also by the evident Photoshop-style of the logo. And yet Neothemi should give the feeling of coming from below, from local realities expanded into a global network granted by the E.C. Hence the regularity of the 12 stars, the reassuring grid of the European logo. And most of all hence the freehand style of the graphic line: no photographic exactness, no highbrow paternalism, but rather an almost childish graphic flow.

The style of this logo implies that culture should feel as lively and compelling as the will to draw lines in the sand (by the way, sand is made of silicon…).

The selected themes are: